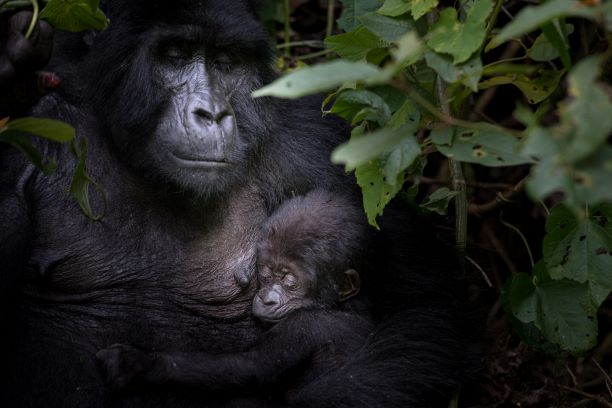 The International Gorilla Conservation Programme is a unique coalition of international conservation organizations whose mission is to secure the future for mountain gorillas.

Indisputably it has been and still is a challenging season for individuals, communities, institutions, and national parks as they cope with the impact of COVID-19. However, the good news is that the mountain gorilla population has witnessed an increase over the last few months. For the first time in the history of mountain gorilla conservation in Bwindi Mgahinga Conservation Area,12 gorilla births were recorded in a period of 16 weeks.

Commenting on the baby boom , Nelson Guma Chief Warden BMCA says, “ I have not witnessed  such a baby boom in the past years. We are excited about the new births. It demonstrates that our conservation efforts are paying off and that collaboration with other conservation partners is the way to go to achieve successful conservation”.

According to Nelson the consistently growing gorilla population in BMCA (from 400 in 2011 to 459 in 2019-(https://igcp.org/content/uploads/2020/09/Mountain-gorilla-census-joint-global-release-31052018-1.pdf) is responsible for the for the increasing number of baby births in the parks. Also, the splitting of individuals from monitored groups to make new families brings about an increase in the number of habituated groups; this in return improves the security, health and provides a conducive environment for reproduction as the gorillas enjoy living in new sizeable groups with less conflict. Additionally, the availability of adequate food for the gorillas in BMCA has also kept the gorillas strong, healthy and favored procreation.

In order to sustain these gains, Nelson says BMCA is committed to enforce the existing mountain gorilla tourism rules including the one hour rule recommended for anyone  visiting mountain gorillas, mandatory wearing of masks, and, observing a safe distance between the tourists and the gorillas. Nelson explains that the viewing distance has recently been increased from 7-10 meters as a precaution against the transmission of COVID-19.

Nelson adds that BMCA also has strategic guidelines aimed at strengthening the conservation measures in place for instance camping rules for people camping close to the gorilla habitat. The strategy also advocates for increased ecological perimeters to ascertain habitation status. Among other Human Wildlife Conflict measures, a buffer zone measuring 12km by 350m was put in place for mountain gorillas to range in once they leave the park instead of neighboring gardens. This measure helps in mitigating human wildlife conflict and safeguarding the endangered mountain gorillas from the risk of disease transmission as it minimizes human – gorilla interaction.  Before the buffer zone, gorillas are reported to have spent over 60% of their time in the neighbouring gardens and communities ( Nkuringo Buffer Zone General Management plan205-2019).

“Enhancing conservation measures gives us the confidence of a better conservation story tomorrow. We will continually improve the law enforcement and security aspect around the protected areas with expectation of more results,” Nelson notes.

In a similar development, 8 births were recorded in DRC in the last 40 weeks, among them being a set of twins born to Gato of Nyakamwe group.

Regardless of the increase in the mountain gorilla population announced in the Bwindi-Sarambwe census results released last year and the recent births recorded in the region, mountain gorillas remain a conservation dependent species.  With several threats still facing them including the current Corona virus disease, poaching, habitat loss and encroachment their survival and safety largely depends on our individual actions.  We need to conduct responsible tourism and strengthen the exiting conservation approaches.