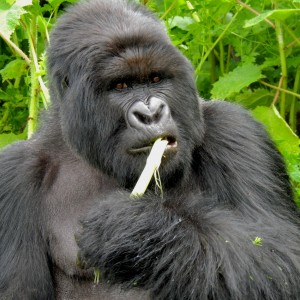 Amahoro group is found in Volcanoes National Park in Rwanda and is led by the dominant Silverback Gahinga. The habituation of Amahoro group started in March 1996 and stopped in 1997 due to war. The group was opened for tourism in 2000. On May 4th, 2002, the dominant Silverback Amahoro died at about 31 years of age. After his death the two subordinate Silverbacks Ubumwe and Charles could not agree on who would step in Amahoro’s leadership.  Therefore, the group split into two; the main Amahoro led by Ubumwe and another led by Charles. Charles’s group was later called Amahoro B then Umubano. Today Amahoro group is made up of 21 individuals including 3 Silverbacks, 7 Adult females, 1 Blackback, 2 Sub-adult females, 2 Juvenile and 6 Infants. Amahoro group is also under observation of a split. According to reports one Silverback has on several occasions disappeared for days with about 7 individuals but later returns to the group.