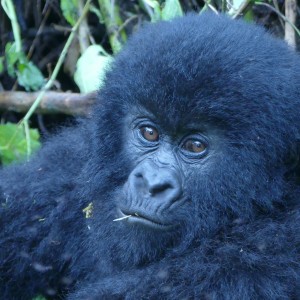 Humba group is found between Gatovu and Bikenge areas of Virunga National Park in DRC and is led by the dominant Silverback Humba. The group was formed in 1998 following a split from Rugendo group. Humba a son to Rugendo, broke away from Rugendo group with 6 individuals leaving the father Rugendo with just 9 individuals. Interestingly the Silverback Nyakamwe decided to go with his brother Humba. By 2014, Humba group had increased to 16 individuals, unfortunately Humba and his brother Nyakamwe got into a fight leading to the split of the group.  Humba stayed with only 6 individuals while his brother Nyakamwe walked away with 10 individuals. In February 2015 Humba interacted with Munyaga group and surprisingly the sub-adult female Kakule left Munyaga group for Humba group. Interactions and births continue to occur. Today the group is headed by the dominant Silverback Humba and is composed of 15 individuals including 2 Silverbacks, 4 Adult females, 4 Juveniles, and 5 Infants.