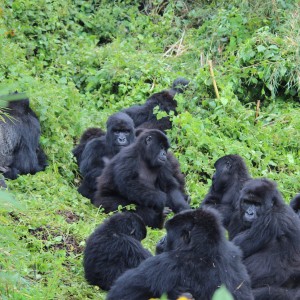 Igisha group is found in Volcanoes National Park in Rwanda and is led by the dominant Silverback Igisha. Igisha split from the original Susa on November 30th, 2014. Igisha moved with 23 individuals and formed a new group that was later named Igisha after him. Because of his aggressive and protective nature, the dominant Silverback Igisha has kept the group safe and won over more members from the surrounding groups. Igisha group is currently composed of 34 individuals including 6 Silverbacks, 10 Adult females, 1 Black back, 1 Sub-adult female, 2 Sub adult males, 3 Juveniles and 11 Infants.