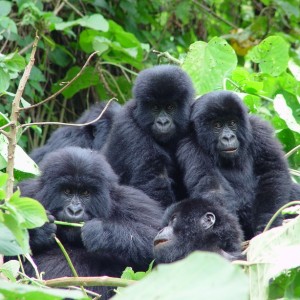 Kabirizi group is found in Bukima area of Virunga National Park in DRC and is led by the dominant Silverback Kabirizi. Around 1994, Zunguruka group led by the Silverback Zunguruka was habituated in Bukima area. Zunguruka later died of old age and left his son Ndungutse to lead the group, until 1997 when he (Ndugutse) was killed by bullets in a crossfire between DR Congo army and Rwandan rebels near the Bukima patrol post. After Ndungutse’s death, his son Buhanga took over the leadership of the group with 13 individuals. Unfortunately, Buhanga faced resistance from his brother Karateka. Later, the two brothers Buhanga and Karateka fought, forcing Karateka to leave the group with 3 individuals. On January 10th , 1998, Buhanga interacted with Karateka and grabbed back 3 individuals leaving Karateka a lone Silverback. On 06/02/1998, Buhanga had a violent interaction with Kabirizi (then alone Silverback too) that left him with serious wounds, which later claimed his life. Surprisingly Buhanga in his wounded condition was still able to protect and keep all his group members together. After his death, an adult female called Nsekuye took over the leadership of this wandering group. Her leadership did not last long since on 23/02/1998, she was overthrown by a lone Silverback called Munyaga. On the other hand, Kabirizi grabbed a few individuals from Luwawa group when its dominant Silverback Luwawa was killed in 1995. Later, Kabirizi interacted with Munyaga several times until he grabbed all his females to form a big group. On January 27th, 2013, Kabirizi group split into two. Kabirizi remained with 16 individuals while his son Bageni took away 20 individuals. Today Kabirizi group is composed of 24 individuals including 6 Silverbacks, 1 Black-back, 7     Adult females, 2 Sub- adults, 2 Juveniles and 6 Infants.