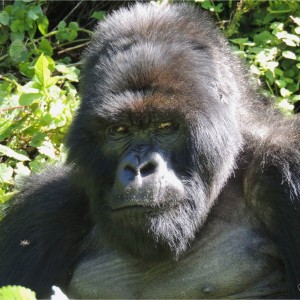 Karisimbi group is found in Volcanoes National Park in Rwanda and by the time of departure, the group was led by Nyagakangaga. This group was formed after the split of the main Susa group on June 28th, 2009. On this day Nyagakangaga who was among several subordinate Silverbacks took 13 individuals and moved away to form his own group referred as Susa B then. It was later named Karisimbi in 2010 at the gorilla naming ceremony – Kwita Izina. The group was named Karisimbi because; it was usually monitored ranging from within and around Karisimbi Mountain in Volcanoes National Park. Unfortunately, another fraction broke away from Karisimbi on April 10th, 2012, to form another group called Isimbi. Today, Karisimbi group is composed of an unknown number since it has not been seen since October 2016.  However, before it crossed to DRC border on October 7th, 2016, the total number of group individuals was 10 including 5 Silverbacks, 1 Adult female, 2 Blackbacks, 1 Sub-adult female, 1 Juvenile.