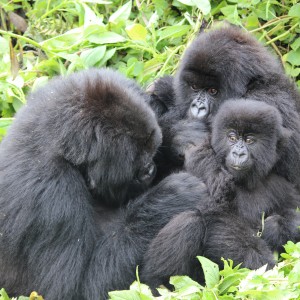 Susa group is found in Volcanoes National Park in Rwanda and is led by the dominant Silverback Impuzamahanga. It is also referred to as the original Susa. Susa is an old and famous group in Volcanoes National Park formed in 1974 with initially 7 individuals. Before splitting up in 2009 it was the biggest ever recorded group counting 41 members. Susa A split into 2 other groups (Karisimbi and Igisha or Susa B). Karisimbi later split into another faction of Isimbi group. After the split, the original Susa group remained with 16 individuals. Recently an adult female with an infant left the group to join the lone Silverback Noheli to form a new group. Today Susa group is composed of 21 individuals including 3 Silverbacks, 5 Adult females, 3 Blackbacks, 1 Sub-adult female, 4 Juveniles and 5 Infants. Susa is known to have the first set of surviving twins in the history of mountain gorillas first born in 2004 (Impano and Byishimo) and later in 2011 (Impeta and Umudende, although Impeta passed on in 2015). The group is also known to have been a victim of a poaching incident in May 2002 where 2 adult females were killed trying to protect two babies from poachers who wanted to steal and sell them on the illegal market.