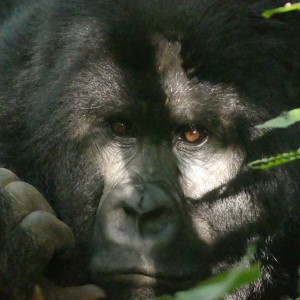 Lulengo group ranges between Bikenga and Jomba areas of Virunga National Park in DRC. Lulengo group is led by the dominant Silverback Lulengo. Initially known as Rugabo, the group’s habituation started in 1985 with the Silverback Rugabo as the group head. Unfortunately, Rugabo and 2 other females were brutally shot dead in 1994 in Jomba. Related to this incident, Mvuyekure a juvenile then was carried away by poachers with the aim of selling him off in Uganda. Fortunately, Mvuyekure was rescued, and the poachers were arrested and imprisoned. So, following the death of Rugabo, his son Lulengo took over leadership of the group which was composed of 12 individuals at the time. A couple of interactions that saw to the transfer of some individuals from Lulengo to other groups was witnessed, for instance; from 1998 Lulengo interacted several times with Mapuwa and Rugendo groups and a good number of his members crossed to these groups. Today Lulengo group is composed of 11 individuals including 1 Silverback, 1 Blackback, 3 Adult females, 2 Sub-adults, 2 Juveniles and 2 Infants.