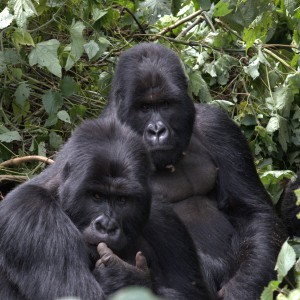 Mapuwa group is found in Jomba area of Virunga National Park in DRC and is led by the dominant Silverback Mvuyekure. Mapuwa group was formed on August 1st, 1998, by the Silverback Mapuwa when he grabbed 2 females (Kagofero and Kanepo) from Lulengo group to form his own group. Mapuwa is a son to the Silverback Rugendo and evolved in Rugendo group. In August 1995, Mapuwa left Rugendo group at the same time as his brother Ruzirabwoba for solitary life. In 2017, the group split into two. Mvuyekure (a Silverback among the group) went away with most of the group members and formed its own group (Nvuyekure) leaving Mapuwa with only 3 individuals. And in March 2019 these two groups (Mapuwa and Mvuyekure) ranging in the same area interacted and joined again under the leadership of Mvuyekure (most probably due to the elderly age of Silverback Mapuwa). Mapuwa group is composed of 26 individuals including 3 Silverbacks, 1 Blackback, 8 Adult females,3 Sub-adults, 3 Juveniles and 8 Infants.