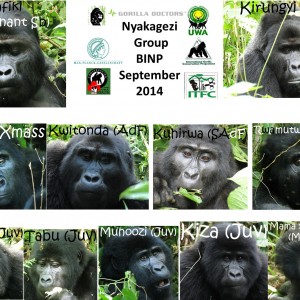 Nkuringo group is found in Nkuringo tourism sector of Bwindi Impenetrable National Park and is headed by blackback Rwamutwe.  Nkuringo was the first gorilla group to be habituated in the entire southern sector of BINP since 1997. Initially, the group had 17 members but over time a couple of group dynamics have taken place including dispersal of some members, births, and deaths too. The group faced a very sad incidence where the then dominant Silverback Rafiki was murdered by poachers. Since then, blackback Rwamutwe has undertaken leadership. The group is currently composed of 12 members including 4 Blackbacks, 4 Adult females and 4 Infants.  Nkuringo group is also the first gorilla group to record the birth of twins in Bwindi Impenetrable National Park in December 2004. The group is famously known for foraging outside the park in the buffer zone for up to 98% of their time. This practice led to the displacement of the former local human settlers in the frontline villages in Nkuringo sector to create a buffer zone to minimize human-wildlife interface. This displacement followed an outbreak of Scabies in the Nkuringo group in December 2000.