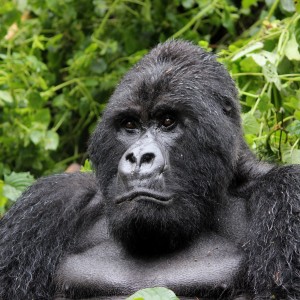 
Sabyinyo group is found in Volcanoes National Park in Rwanda and is led by the dominant Silverback Gihishamwotsi. At its habituation the group was named Amavubi (wasps) due to their aggressive character which gave hard time to the habituation field teams. The name was later changed to Sabyinyo, after the mountain where the group was first seen. After the death of the Silverback Murthi of Group 13, Guhonda a lone Silverback took advantage of Murthi’s death and grabbed 3 females from Group 13 (Gukunda, Kampanga and Ijisho) and a number of others from Group 11. These are the individuals that Guhonda used to form his group with. Sabyinyo group currently consists of 18 individuals including 3 Silverbacks, 6 Adult females, 1 Sub adult, 4 Juveniles and 4 Infants.