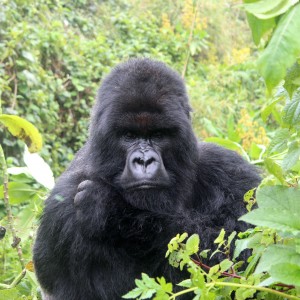 Umubano group is found in Volcanoes National Park in Rwanda. Umubano which was formerly part of Amahoro group is still led by Charles the dominant Silverback. Umubano separated from Amahoro A (led by Ubumwe) without aggression. Shortly after the separation, the 2 groups would meet, interact, and feed together for one or two days and then go separate ways. Umubano group is composed of 14 individuals, including 6 Silverbacks, 2 Adult females, 3 Blackbacks, 2 Juveniles and 1 Infant.